Steve posted an event on his Facebook page.  I attended high school with Steve from 1970 until 1973, when we graduated and I moved north, back to Canada, while most of my peers from Great Falls, Montana, ended up moving to Montana Universities.  This guest speaker event sponsored by Swan Valley Connections, appealed to me from the moment I saw it, probably because I’ve watched a Bald Eagle family nesting in a very special spot on the edge of the Bow River for going on eight years.  I have learned so much from these beautiful raptors over the years, but realize after last evening, that I have so much more to learn.

Kate Davis lives in the Bitterroot Valleyin Western Montana and is an acclaimed photographer, steward, educator, writer and presenter who has studied and educated the public about Raptors for years.   Kate’s biographical notes can be found here.

Steve lives in Condon, Montana in the Swan Valley, a wonderfully rich ecosystem and landscape teaming with multiple species of mammals, fish, birds, plants and trees and raptors.  I am really grateful to Steve for posting and hope to be included in future Swan Valley Connections events.

Kate has written several valuable books/resources and is truly, an expert in this field of study.  As a result of this presentation, I will be picking up some of the books as they will be helpful in my identification of a variety of raptors and to further my knowledge in the behaviours and abilities of these.  When I capture photos of hawks, while circling my place at the river, I always have to share them to the group, Alberta Birds, because I am unable to make a proper identification without the help of others.

The evening’s talk was riddled with rich narratives coming from Kate’s memories and research, but interspersed were the introductions to three raptors that live with Kate

First, we met the Sonora, an Apolomado Falcon.

We are thrilled to have an Aplomado Falcon thanks to The Peregrine Fund in Boise, Idaho. We picked her up on July 2nd in 2013 at 17 days of age and fresh out of their breeding project. She rode home in a laundry basket and hung out in a baby play pen (and on the window sill in the office) as a growing girl. This Northern subspecies disappeared from the U.S. in the 1950’s and was listed as endangered in 1986. Habitat destruction and later on pesticides caused their demise, and a breeding and re-introduction program was started by the Santa Cruz Predatory Research Group, and continued by The Peregrine Fund. A small population has been established in Texas, and breeding project came to a close, this just about the last one.

I am always one to be concerned with the shrinking habitats of species along the Bow River and the horrendous impact the development of the Southwest Ring Road has had for our local populations of birds, mammals and other species. Next, we met Sibley.  Sibley is one of 18 non-releasable and falconry birds that live in enclosures next to Davis’s house, and this evening, was present IN Kate’s house.  What a profoundly beautiful creature! 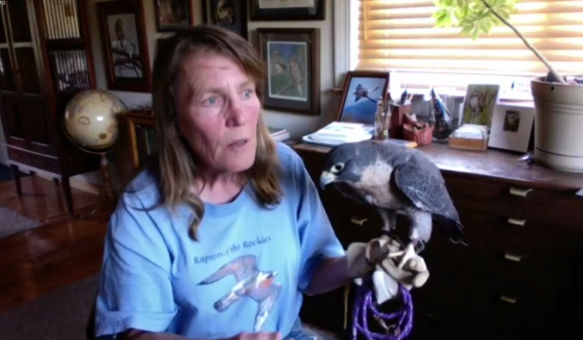 And finally, we met Owen, the Sawet Owl.  Most entertaining was Kate’s ability to make the various calls of owls.  This was such an entertaining and informative presentation.  While Covid-19 keeps us from an authentic connection, we are blessed that technology brings us into space with one another in a different way.  I am so thankful to the Swan Valley Connections for making this happen.  Ramona, and some of my birder-friends from the Bow River would enjoy such as this and I’ll make certain that I invite them in enough time to connect for future presentations. 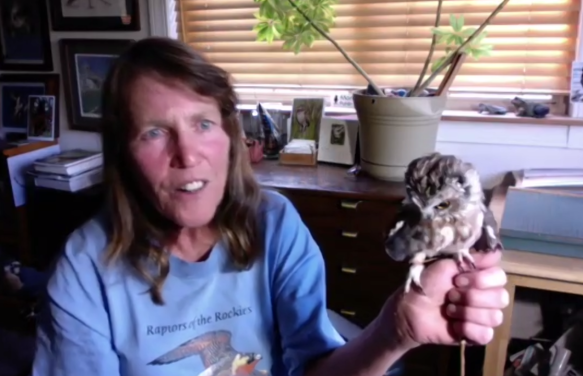 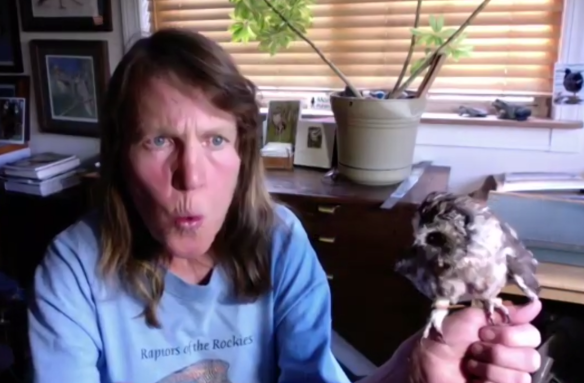 65% of Raptors do not live their first year.  They are hit by cars.  They go hungry, finding it difficult to locate and kill prey that ‘doesn’t want to get caught’.  Their struggle to breed and raise young in primarily hostile environments is extraordinary.  The fact that I am blessed enough to watch our Bald Eagle family so regularly is a true gift.  If eagles are not stressed, they will live for forty years.  That is just so absolutely amazing.

Kate’s primary message to the public is not necessarily to get the big work done in terms of the protection of these species (although that would be nice)….but, her message is to GO OUTSIDE and when you do, leave your cell phones behind.