I knew there was going to be a twist to this evening of painting, for a few reasons.  Our MCs were going to be three of the ladies (three muses) who have consistently supported the Gorilla House over the last several months.  I also knew that my friend Rylan was going to visit the House for the first time.  The themes for the night had been pre-selected and so we were able to consider subject matter in advance.  The topics were 1. Epiphany 2. Xanadu and 3. Kubla Khan

In my mind, the painting that came to life in my head would not be something that I could sell or market, but it was something I wanted to try to paint.  Based on some of my reading, I wished to explore what makes for an Epiphany.  In the end, I’ve decided that epiphanies (magic) comes from observing, and I mean REALLY observing,  ‘the ordinary’.  To experience an epiphany is a gift.  It is a gift from the self to the self.  It is the Divine within us.  The poem I chose to exemplify this concept was written by American Poet Laureate, Ted Kooser.  And it is called Epiphany.

From the Poetry Foundation.

I have seen the Brown Recluse Spider
run with a net in her hand, or rather,
what resembled a net, what resembled
a hand. She ran down the gleaming white floor
of the bathtub, trailing a frail swirl
of hair, and in it the hull of a beetle
lay woven. The hair was my wife’s,
long and dark, a few loose strands, a curl
she might idly have turned on a finger,
she might idly have twisted, speaking to me,
and the legs of the beetle were broken.

“For the french philosopher Emmanuel Lévinas, epiphany or a manifestation of the divine is seen in another’s face.”

I painted my face-to-face.  Thank you to Belinda who generously purchased this piece at auction. “I Am Talking to Myself Again.”  And I’m proud of daughter Cayley for making art in the battle and selling her piece at auction.  Desere’s daughter, Amélie, also painted for the first time in an art battle.  So…that was double-fun!

Here, a selection of my random photos from the evening including Gorilla House schematics and Bruce’s demonstration of image transfers.  More to follow as people post. 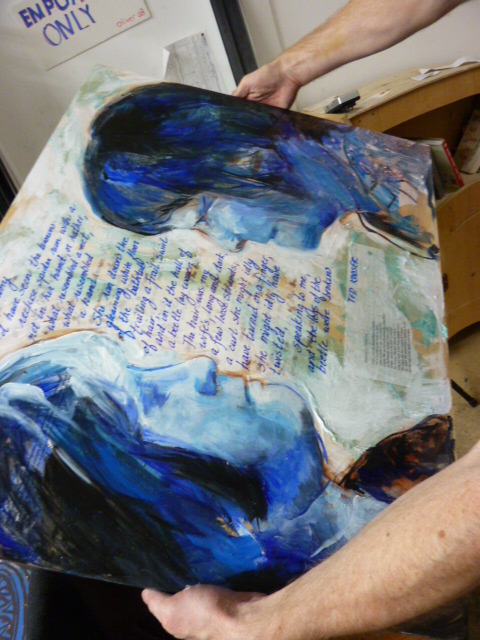 Kubla Khan is a poem written by Samuel Taylor Coleridge, completed in 1797 and published in 1816. According to Coleridge’s Preface to Kubla Khan, the poem was composed one night after he experienced an opium influenced dream after reading a work describing Xanadu, the summer palace of the Mongol ruler and Emperor of China Kublai Khan.[1] Upon waking, he set about writing lines of poetry that came to him from the dream until he was interrupted by a person from Porlock. The poem could not be completed according to its original 200–300 line plan as the interruption caused him to forget the lines. He left it unpublished and kept it for private readings for his friends until 1816 when, on the prompting by George Gordon Byron, it was published.

These are the lines and the analysis that most struck me.

The subsequent passage refers to unnamed witnesses who may also hear this, and thereby share in the narrator’s vision of a replicated, ethereal, Xanadu. Harold Bloom suggests that the power of the poetic imagination, stronger than nature or art, fills the narrator and grants him the ability to share this vision with others through his poetry. The narrator would thereby be elevated to an awesome, almost mythical status, as one who has experienced an Edenic paradise available only to those who have similarly mastered these creative powers:[57]

And all who heard should see them there,
And all should cry, Beware! Beware!
His flashing eyes, his floating hair!
Weave a circle round him thrice,
And close your eyes with holy dread,
For he on honey-dew hath fed,
And drunk the milk of Paradise. (lines 48–54)