It came to me like a dream…a waking dream. For weeks I had, during daytime hours, pondered what to do for my grandson for Christmas morning 2019. For some reason, I thought that this decision would lay down the tracks for every other decision I would make on his behalf for his entire lifetime. (Crazy, I know.) I don’t take my place as Gramma lightly, exemplified in my willingness to put myself out there as a bumble bee.  Isn’t my grandson handsome? 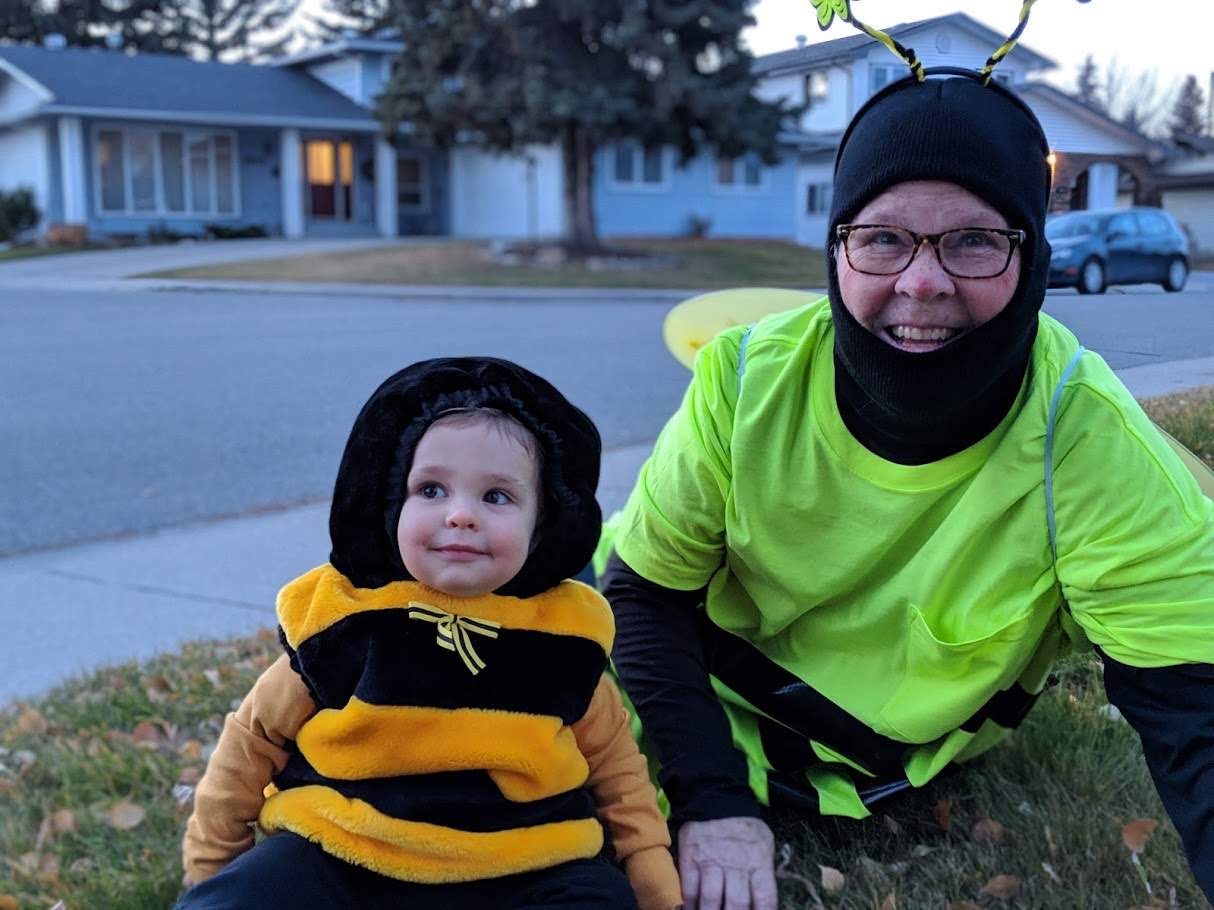 My mother had such a talent for sewing that for every Christmas and birthday, there were sure to be homemade gifts arrive in the mail or delivered, personally. They were tagged and finished beautifully, “To my Grand Daughter, with Love!” I follow in impressive footsteps.

So, it was on a morning in October, that a waking dream came to me. I sleep in the deepest darkest lowest level of the house and it’s pretty cold at times. I was curled in snug under the covers, when ‘it’ came to me in half-sleep. “I could build my grandson a puppet theater!” I imagined him as he is now, watching his Mommy and Daddy being funny and laughing behind the stage…and then, with little friends, growing up…and then making hilarious fun as an upper elementary student…and then, possibly, with his life marked by all sorts of little stories that Mommy made up…and stories that he performed for evening entertainment, he might even take the puppet theater with him, after a long and probably painful storage dilemma between his Mom and Dad and him. Yes, I conjured all of this up in the rumblings of a dark morning in October.

When I woke and got up that morning, shuffling to the kitchen to make my first cup of coffee, I said aloud, “Gramma is going to make a puppet theater!”

It began with a plan.  I scoured Amazon, Ebay, Kijiji and puppet companies the world over.  Finally, I came up with a plan that I wanted to work with, a little homemade theater that I spotted on Kijiji.  If I had an interest in driving to the city of Lacombe to pick this one up for 100.00, it would have been easily revised. 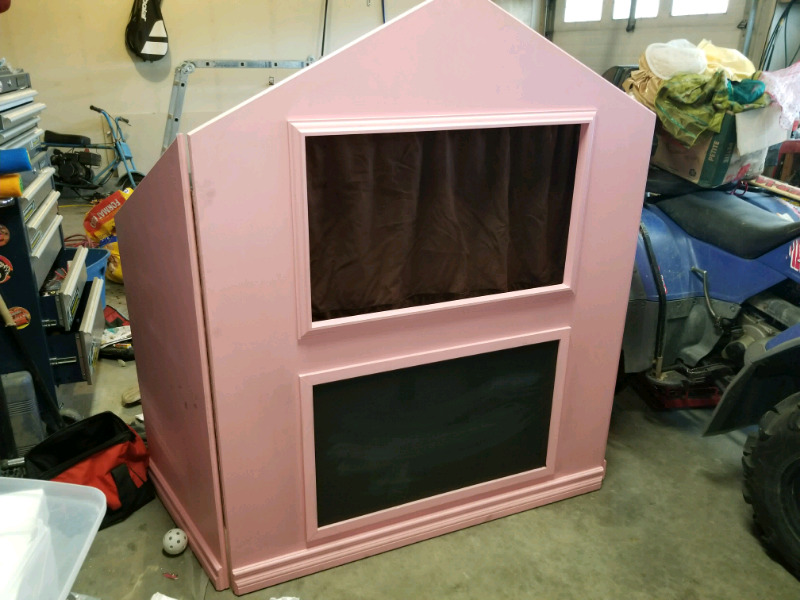 But, nah…I would create something amazing, at least I would be the one with the vision!  In terms of tools, I just don’t have what it takes.  I needed to track down Santa’s helper, and quick!

After my communications with a high school shop teacher came up empty, I went to my go-to guy, Len, a neighbour who helps me with all sorts of odd jobs when I don’t have the tools necessary.  He works independently and I like to support him in his various efforts.

I took in account Steven’s height and the fact that I wanted at least one little friend to be able to participate with him during his childhood productions and so I drew up this plan.  Now, this wee sheet that was sketched out in my day timer was not so simple as it might appear!  Lots of thought went into this, so please, readers, don’t think that this came fleetingly!

Within a week or so…Len came up with some ideas of his own.  I talked to him about a concept of design that would align itself with Steven’s birthing songs and art…something to do with ‘Under the Sea’ or ‘An Octopus’s Garden’.  Insert music here.

I was pretty darned happy when Len and James brought the puppet theater off the truck and into the studio, even though the weight of this beast certainly didn’t mean that I would be moving it around a lot.  It would have to find itself a space and it was at this stage that I first became concerned that it might never really find its way into a forever-home.

Safe in my studio, I was able to begin measuring and planning for curtains, backdrops and decoration.  I began by applying two coats of primer.

In the evenings, I was bopping in and out of shops, planning and scheming a system that would work for the draperies.  I wanted them to mimic the velvet curtains I imagined in the grand theaters.  In the end, the installation of curtains ended up being so darned challenging.  This lady became one of my friends on this mission…taking several different exchanges as I would return rods…experiment…ask for help.

In the end I settled on these velour panels…and now, to seek out someone who might hem them up for me.

I won’t go into details (is this a detail?)…but, at one point, these small bits of hardware were purchased as a bit of an experiment.  I feature them here simply because the man who helped me in this department of the big box store, Home Depot, was such an angel and was seriously the greatest guy to talk to.  He was so excited about my ‘Gramma Builds a Puppet Theater’ project, that my problem-solving ended up being a huge conversation.  I just really treasure people like him and only regret that I didn’t ask his name.

I solicited a lovely high school student, Emmanuella, to sew the draperies, under the supervision of her Fashions teacher, Fierina.  Emmanuella has excelled in this area and advanced beyond all of the projects assigned.  It was a great idea for the both of us and I really enjoyed getting to know such a conscientious and beautiful person. 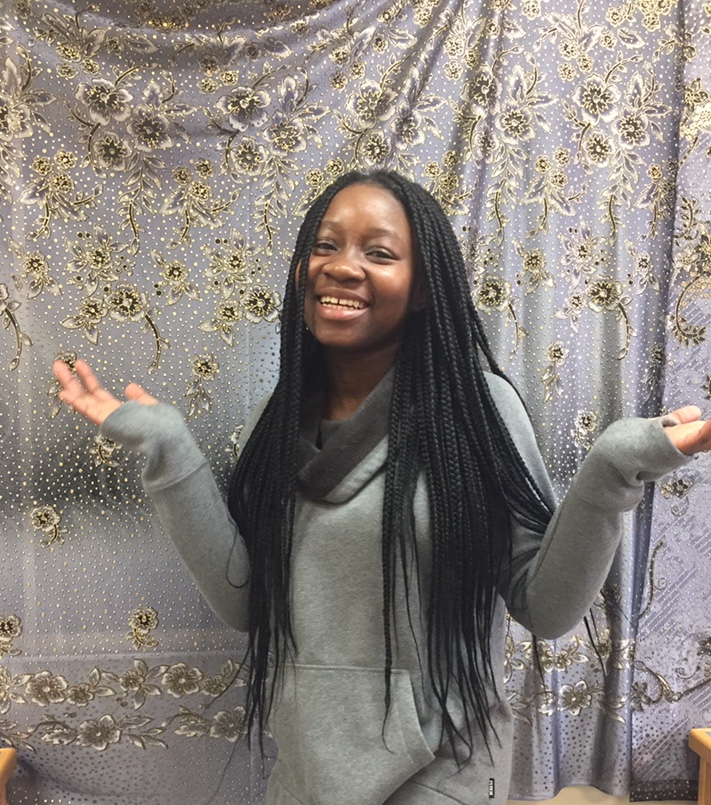 Rooting through my basement storage cupboard, I located some old tins of house paint and selected a colour that would help me achieve my underwater theme.

While pursuing the painting and project, I began to search out puppets.  Late into my evenings, I would explore on-line sites and finally decided to write a story about an Eagle Walk.  Ikea is the only store to have an eagle puppet, and ironically enough, I never did get myself to the store to purchase the puppet.  One day, perhaps. The eagle, therefore, was represented by a sound effect…very very cool!

Basically, I ended up purchasing puppets that I fell in love with, after exploring so many toy shops in town.  For the sake of this post, I have spared you archives for several locations.  It was actually Scholastic, on Macleod, where I tracked down chicken and monkey in a barrel, both two of my favourites. 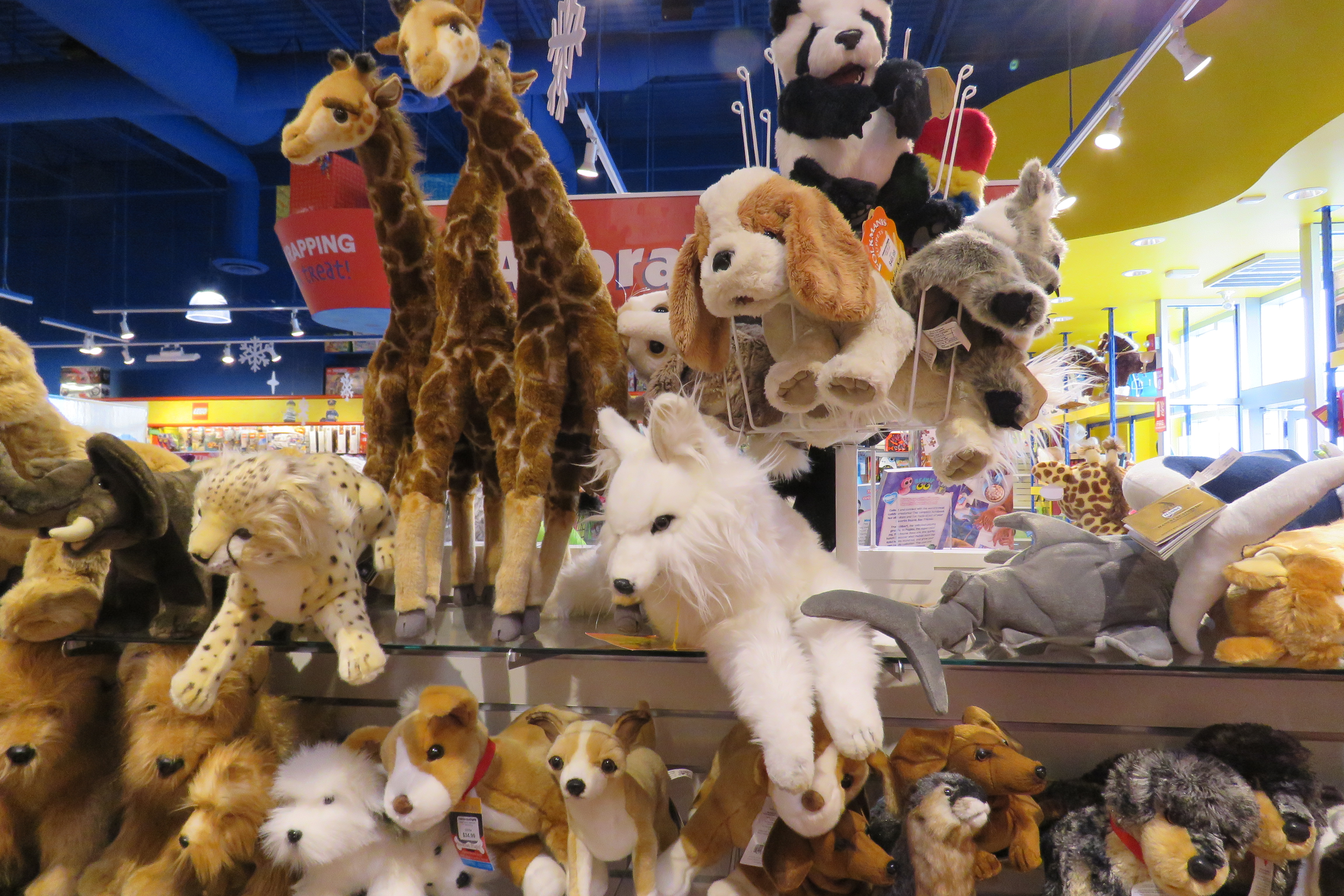 I found a perfect stuffie border collie at the Goodwill store and at home, washed and dried it, gutted it, inserted a glove and created our Maxman character.  Thanks, James, for exploring so many stores with me, looking for the perfect puppet collection.

I began to decorate the puppet theater, first locating a dry erase board for puppet show announcements, at the Dollarama…hmmm…or did it end up being Staples? While at the dollar store, I picked up some rolls of ribbon, thinking I could create a celebratory effect by placing some of that here and there.  I am really NO DECORATOR!  Let’s face it, the greatest problem of them all was the curtain.  It was getting close to the wire, by this point, and while really wanting to pain scene backdrops for the theater, I let go of that project, thinking that this would be an idea for later gifts.

I painted a few bits onto the outside panels and opted to leave the front of the theater plane.  Embellishments definitely made a difference!

I think it was only a short time before the actual performance when I solicited the help of friends, Angela and Nigel, to create puppet figures for Doug, Erin, Gramma and Steven.  They came to our Christmas feast, with felt puppet figures in tow…and while Christmas went remarkably long due to an unforeseen crash by young Steven and a trip to the hospital so that his forehead might be taped back together…THE SHOW DID GO ON!  But…I get ‘A HEAD’ of myself here.

The puppet theater, at completion… 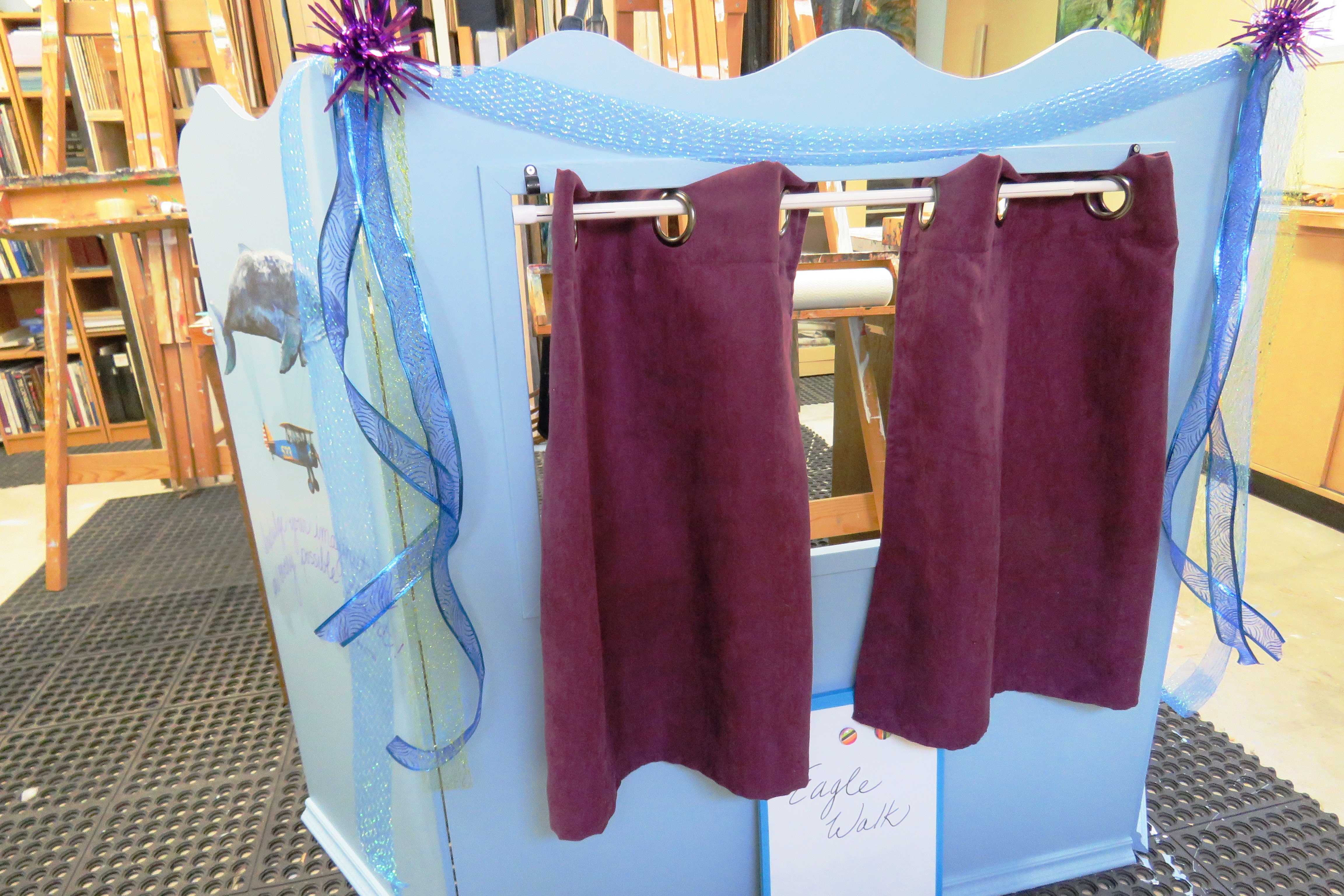 It was at the pre-function on Christmas day that the screenplay came to be created in a very collaborative way and with many laughs…all directed by our writer/editor in residence, my sister-friend, Karen.  The traditional big feast happened and then, interspersed with the drive to hospital and back, the $10 gift steal that happened incorrectly this year (and did I listen to the five people who tried to tell me?….next time, don’t be so polite), under my direction, the puppet show was set, complete with eagle sound effects provided by Tyler (mind you…the timing might have been a little off) and narration delivered, confidently, by Shawn (you are such a good sport!).

A small capture of that…

Sending love to all who helped this dream happen…

Somewhere out there, there is a video from this debut, but I don’t know where it is or if I have permission to share.  I just am grateful for Christmas magic.