On January 28, 2016, one of my favourite relations slipped out of this world and into eternity.  May he rest in peace and may perpetual light shine upon him.  Heart felt sadness is shared with his beautiful family. 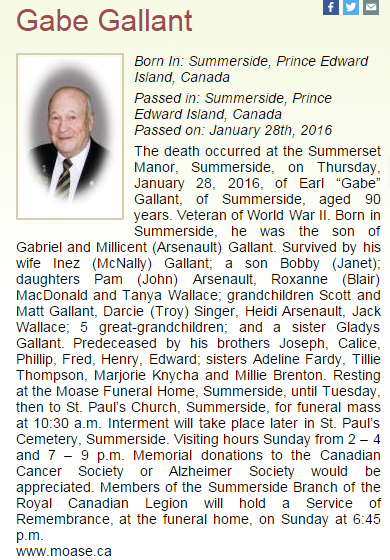 Earl “Gabe” Gallant, carrying his father Gabe Gallant’s name (I didn’t know this), was one of my Maternal Grandmother, Tilly Gallant’s brothers.  It has been sad to lose so many on this line.  I appreciated my mother’s stories and her love for this ‘island’ family.  My great Auntie Gladys has lost all of her brothers and sisters now.  I pray for her and for Earl’s family, especially his loving wife, Inez.

Here is Great Grampa Gabe Gallant’s resting place, alongside my Great Gramma.  This photograph was taken by my second cousin, James Perry.  I stood before my Mamie and Papie when I visited in 2011.  May they rest in peace. 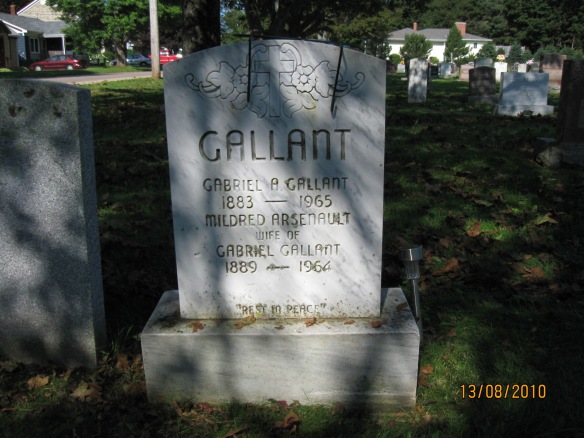 I am so proud of the military service of all of the Gallant brothers and I’m proud that they offered up their lives to share with others, that experience, through stories, where and when they could.  Uncle Earl sat in the living room of the original homestead and shared with me that he still kept a bullet in his leg and because I was so young at the time, I thought that was the coolest thing.  He sort of became a hero to me and I would often ask my mother to talk about him.

Here is a photo that Inez sent to me, inside a little greeting some years ago.  It shows Uncle Earl as a young military man. 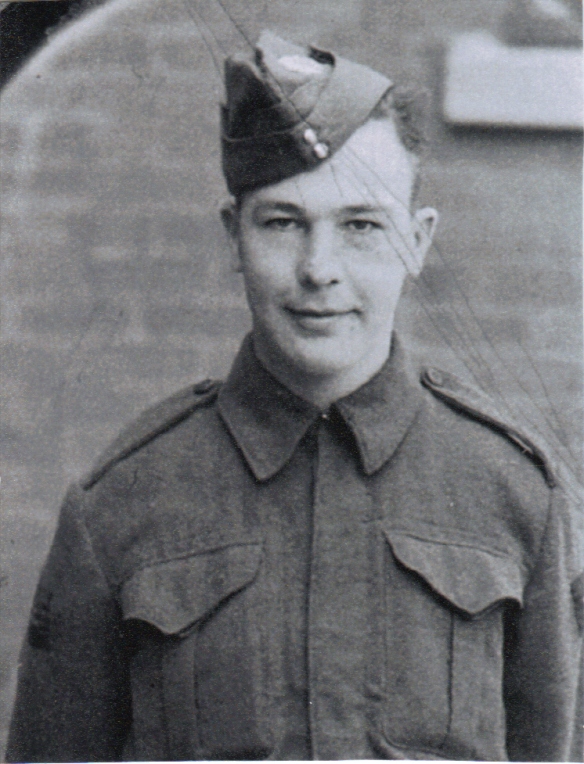 Gramma Tilly Thompson, with her brother, Earl Gallant.  I love this photograph.  I will always love them! 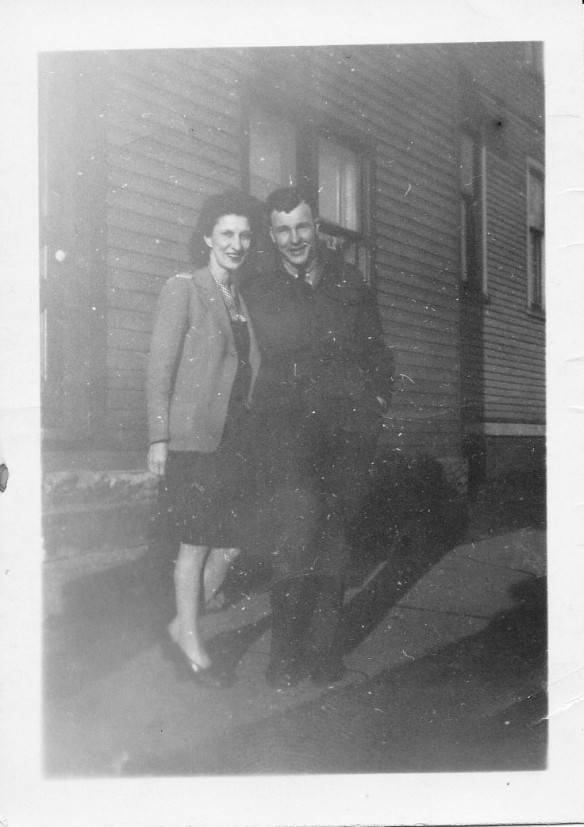 The following article/interview was written by Nancy MacPhee

SUMMERSIDE – It was Earl Gallant’s chance to see the world.  It was 1942 and the young Summerside man, like his six older brothers, enlisted to fight in the Second World War.

“I wanted to fight for my country and I wanted to get off the Island. I had never been anywhere before,” recalls the 86-year-old.

In order to enlist, the 17-year-old had to lie about his age. After training in Charlottetown and Halifax, he boarded a cattle ship on Aug. 9, 1942, which ended up in England.

Gallant was scared of what lie ahead of him but, with a job to do and his life on the line, knew there was no time for fear.

“I said to myself, Earl, you joined the army to fight, so don’t be scared. After that I seemed not to be scared of nothing. I wanted to go into action. That’s all I wanted to do.”

Earl was part of a transport company responsible for bringing ammunition to the front lines, unloading it and bringing refugees to camp.

Time wasn’t all spent on the battlefield as Earl spent his free time at a local pub where he would sing a song or two.

He and a fellow officer would go AWOL in Scotland, pooling their money and spending it drinking for nine days. Their punishment was 21 days of field training and being docked a month’s pay.

Earl recalls, while on leave and touring Buckingham Palace, a fateful meeting.

“There was… a bunch you were supposed to stay with. Me, I wanted to see other things. I walked around and I bumped into the Queen’s mother. I said, ‘Oops’, and she said something, and I took off.”

Earl met up with several of his brothers overseas, all of whom didn’t recognize their younger brother.

One of those brothers, Joseph, wouldn’t come home, killed in battle in Italy. Earl found out the news via a publication carrying names of injured and dead.

Gallant’s time on the frontlines was short, ending with a gunshot to the right leg on the battlefield on Aug. 6, 1944.

“I was on guard duty. All at once I felt something hit me in the leg and I fell down,” he recalled. “It felt just like someone stuck a hot poker on my leg. I didn’t mind it too much. When we were driving every jerk of the Jeep, it was kind of sore.”

But before Earl could be taken to safety he returned to the frontlines.

“The driver got lost and said the only way he could find his way back was to go up to the frontlines and get his bearings and find his way back,” he recalls. “I said get up there and get back as fast as you can.”

With a bullet in his leg Earl couldn’t join his outfit in France and eventually returned to Canada, this time on a luxury liner, in March 1944.

He returned to Summerside and later found work at the P.E.I. Bag Company where he was employed for 44 years. He married Inez and raised four children.

He was with the Reserve Army, retiring as sergeant, an active Legion member, where he worked as a bartender for 21 years, and a member of the Colour Party.

Gallant speaks little about war but each year takes time to remember.

Earl is third from the left. 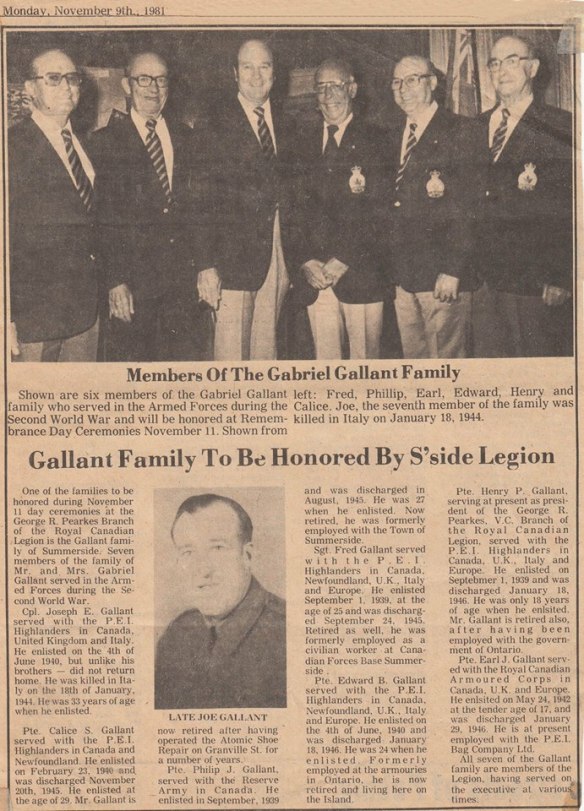 I visited Uncle Earl, Inez and Gladys the summer of 2011 and am so grateful for the shared love and the stories about our family.  I also liked just ‘being’ in the moment with each of them. 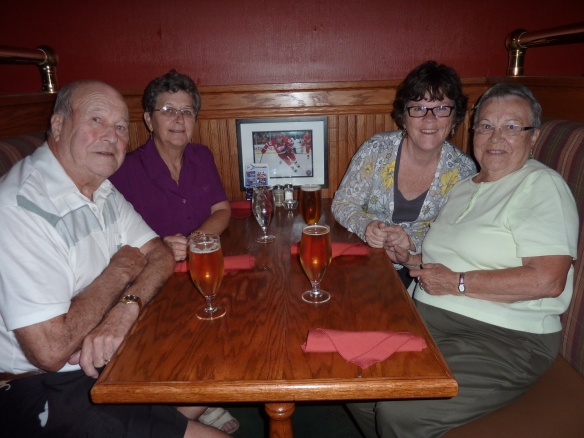 Beautiful Prince Edward Island!  May you remain with the angels, Uncle Earl, until we meet again. 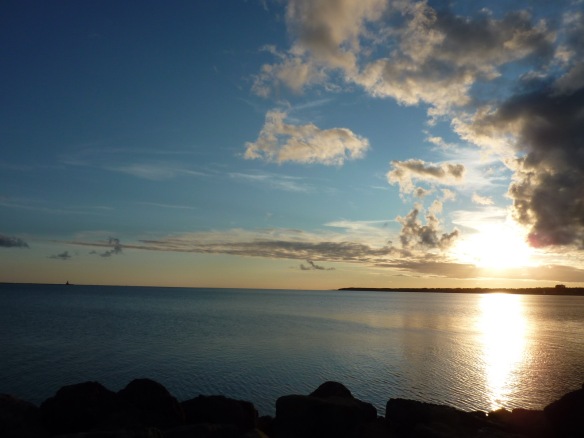