I can’t find a birth certificate for Walter.  On his cross at the Hamilton cemetery, his name is marked as R. Walter.  His age at passing, in 1925, on the same marker, is thirty and that would make his year of birth, 1895…so, there are some inconsistencies here.

Walter appears, first, on the 1901 Hamilton census, with his family and his birth date is listed as December 30, 1895.

It is on November 9, 1915 that Walter enlists, along with hundreds of others in Hamilton,  his regimental number is 305132 and he is listed as a Gunner with the Canadian Field Infantry.  As I’ve explored the history of war at this time, I’ve found some interesting facts.  I’ve been seeking out contact information on historical writer, Ken Scheffler, for permission to publish and credit some findings from the Hamilton Spectator that he has posted on this site and am waiting. For now, I will link to this particular page.

Walter’s brother, George, has already enlisted by this time on September 20, 1915.  As my readers follow the Hamilton, Spectator’s publications, they can see the connection between this huge drive to enlist the young men of Hamilton at the time.

“Official authorization to recruit for the new 40th Sportsmen’s battery was received by the chief recruiting officer this morning, and in connection with this unit the following officers, it was announced, will be attached to the 40th battery; Major G. H. Southam in command, Capt. W. D. Wilson, Lts. A. M. Boyd, T. Beasley, M. E. Wallace and F. G. Scott. These are Hamilton men, who have been in attendance at the provisional school of artillery at Kingston for some time, and will take up their positions when they complete their courses about the middle of September. The 40th batterymen will be taken into the depot strength just as all the other local units, and the examination of recruits will go on the same way and the same forms as the other units.” [Hamilton Spectator; September 1, 1915]

“The recruiting for the artillery in the 4th and 40th batteries continues to keep up fairly steadily. Yesterday nine applications were dealt with and the parade state this morning rose to 136. A number of prominent athletes of this city have told of their intention to join the Sportsmen’s battery and some of them will come up before the medical examiner today.” [Hamilton Spectator; September 2, 1915]

“The battery units are quickly rounding into shape. The parade state is now over 165 and the recruits keep steadily coming in. In a short time the 4th and 40th batteries will be seperated and be taken over by the officers of the Sportsman’s battery. If recruiting keeps up as it has been this will be done as soon as the local officers in training at Kingston.” [Hamilton Spectator; September 9, 1915]

“Recruiting for the batteries is coming along fairly well. The 40th Sportsman’s battery now has 149 recruits, which is over full strength for a battery, but it is understood that 190 men will be recruited by this unit in order to supply drafts to other units if necessary without, at the same time, breaking up the full strength of a battery. There are 54 men on the 4th Battery, and these will be added to according to orders to recruit generally for artillery men.” [Hamilton Spectator; September 15, 1915]

“It has been practically decided that the 30th, 31st and 40th batteries, which local officials have made a strong bid to have quartered in the city over the winter, will spend the winter months at the Woodbine race track grounds, Toronto. The 40th, which is now recruiting in the old drill hall, will likely move off next Thursday morning for the camp at Niagara, and remain there until the long march for Toronto begins, when they will return to the Queen City.” [Hamilton Spectator; September 17, 1915]

“The Sportsmen’s Battery, known as the 40th, in command of Major Gordon H. Southam, sped off to Niagara camp from the T. H. & B. station at 11 o’clock this morning, after receiving a short but enthusiastic farewell before a large crowd. At the station speeches were made by Major Hatch, Dr. Nelson, W. H. Wardrope, K.C., and the mayor, in the presence of a large number of prominent Hamilton citizens who were present for the occasion.

“The battery left 187 strong, mostly uniformed, under the following officers: Major Southam, Capt. W. D. Wilson, Lieuts. A. M. Boyd, Thomas Beasley, F. G. Scott, Eric Wallace and Connie Smythe. Besides these, an advance party of 23 men left Wednesday morning to prepare for the arrival of the battery, which will take up its position on the main camping grounds, apart from the other batteries, which are about three miles out.” [Hamilton Spectator; September 24, 1915]

George’s regimental number is 302338 and Walter is 305132, meaning that George would have been included in the 40th Battery, while Walter would not have.  Again, Ken Scheffler, sheds some light on this organization.

The Battery was assigned two blocks of regimental numbers: 302101-302350 and 305001-305500. Of the latter, it appears that only men up to 305047 enlisted with the Battery. Some of the men listed on this roll had there attestation papers signed by the O.C. of the 42nd Battery but have been left on this list until it can be determined that they had not initially joined the 40th Battery. This list does not include men who later transferred to the Battery.

The blessing in all of this is the fact that both Walter (Gunner) and George (Stationary Engineer) return from war, although Walter passes at a very early age, unmarried and living with his father, on Murray Street.  Mary High, Walter’s mother, passes in 1919 and he follows in 1925. 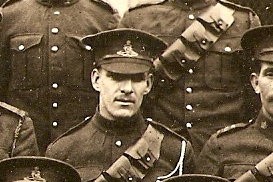 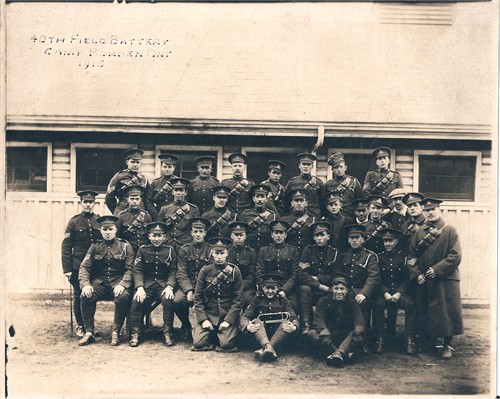 On the 1921 census in Hamilton, we find that the Moors family has moved in with John Haddow, now widowed, at 227 Murray Street.  He is listed as a labourer. 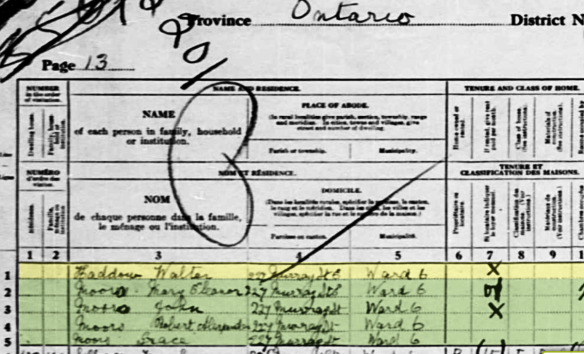 He is described as having a heart problem on his death certificate and is buried with his mother, father and brother in Hamilton Cemetery…at least this is where his military memorial stands, while he is listed as being buried in Holy Sepulchre.