This is a very brief post that serves only to express gratitude for the recent and generous connections I have made related to my Great Grandfather John Moors (1876 – 1918).  What a wonderful thing it is to have cousins discover my writings and research and to respond!  These Paternal relations include Charlene, Jacqueline and now, James. Thank you, for your connection. For about 15 years, I’ve been fanatically engaged in research on both my mother and father’s sides of the family.

Some would ask, “Why does it matter?…or… “What does it all mean, anyway?”…but, there is something innate within me that wants to know who my people are.  It is a weakness.

Long-story-short, I have always looked for a photograph of my Dad’s Grandfather, in uniform.  Every Remembrance Day, I was disappointed that I had only the image of his wedding day.    He died and is buried in Etaples, France.  He was lying in General Canada Hospital #51, when during the night, a bombing raid orchestrated by the Germans, decimated most of  the location and killed John Moors. I’ve thought that he should be remembered. Don’t get me wrong.  I was happy about having the wedding photograph…but, imagine my excitement when, randomly, Charlene sent a photograph over the internet from her home to mine…and to, in a flash, have my Great Grandfather’s visage appear face-to-face with me on a screen in 2018.  GAHHHHH! 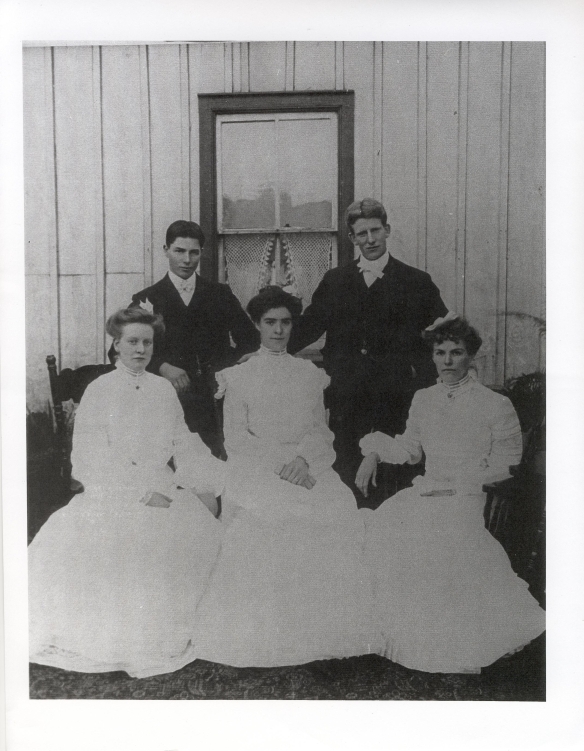 I took this photograph of a photograph that my Auntie Eleanor had hanging in her home.  When it comes to gathering family history, I’m not super fussy about archival quality of images.  It’s a simple blessing to have  moments of history sustained and easily available to as many family members as is possible and as quickly as possible.  I think I’ve written about this before…that ‘in the day’ how would family members even include one another in these histories?  We are sooo blessed!

Here he is!  My Great Grandfather!  What a handsome man!  My father said he had striking red hair, much like my own Grandfather Moors did and now, my own beautiful daughter. 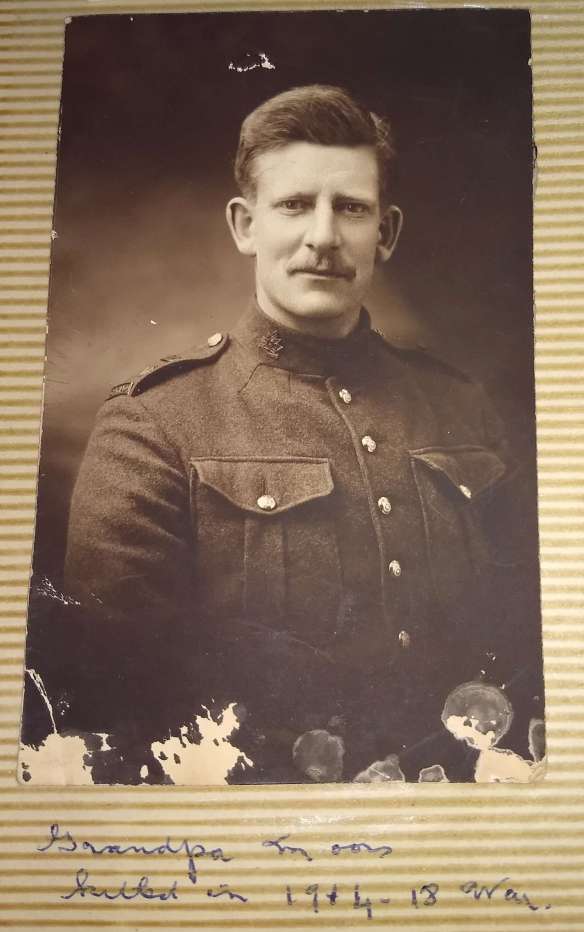 I’m hoping that Betty Silver’s daughter has an opportunity to see this as I know that she was on the look out for the very same image, saying (as other relations remembered) that a large framed photograph of John in uniform hung in the family dining room.

Second to this, Charlene shared what looks like a younger image of this John. 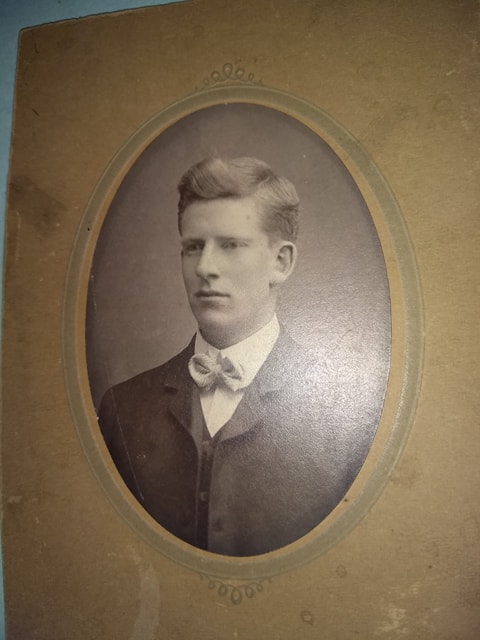 He looked dapper.  I try to imagine as I look at this image, that here is captured the 13 year old who came by ship, on his own…a British Home Child who worked very hard on at least three farm placements including Elora and two outside of Guelph.  This was likely taken during his Hamilton days.

And finally, a family photograph including my own Grandfather John Moors, his young brother Robert (Bob), his sister, Grace and his mother, Mary Eleanor Haddow Moors.  Mary Eleanor had striking dark eyes and hair…I see a lot of my father in her.  This would have been taken some time after the passing of their father and husband John Moors. 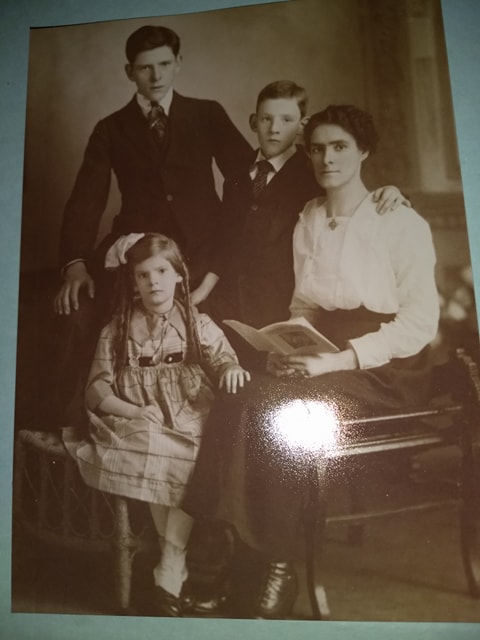 And finally, something that I just received tonight…icing on the cake!  My first cousin once-removed, James, has provided photographs of front and back of John’s military medal.  I’m so grateful that unlike so many families, this object has been cared for and cherished so that now, so many years later, all can enjoy.  Blessings on my family for their generous work.  My cousin, Teddy Witbeck, has been doing a remarkable job working on our family tree on Family Search.  As we continue to piece together our history, his work can be accessed.  Trust me, you will have a great head start that way! 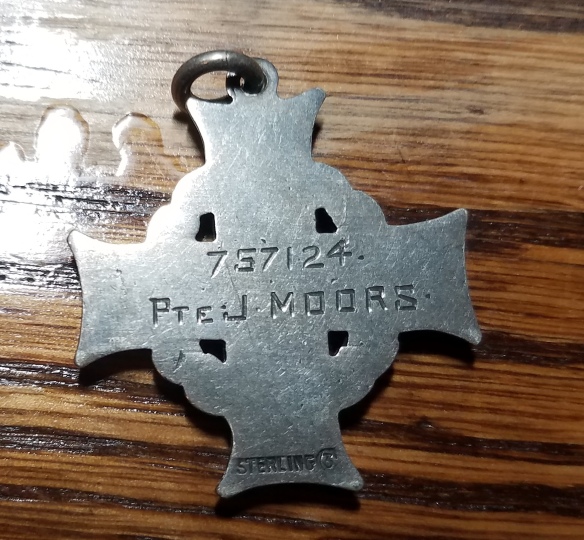 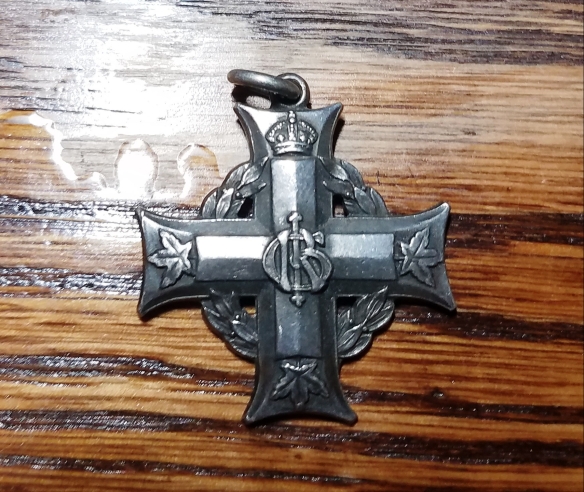 I’ve written away and had much support attaining John’s military record…this medal assignment was included there. 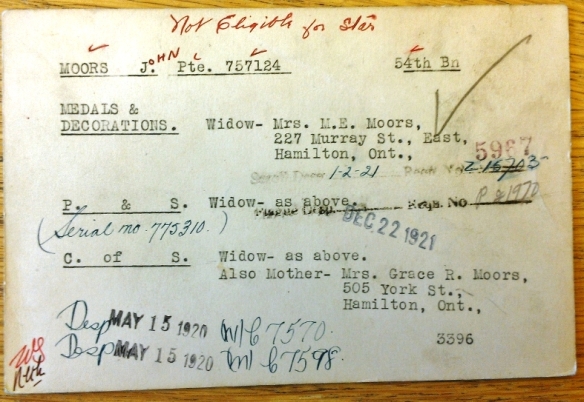