It’s February and elementary art teachers are scrambling to create something with their students that connects with the seasonal event, Valentine’s Day, quickly approaching on February 14.  Red, pink and white lace begin to appear in all sorts of shades, tints and forms, as does the heart motif.  Popping up are paper weavings, rainbow bracelets and hearts growing off of trees…all sorts of projects, Pinterest or otherwise.  I think it’s important, regardless of the timeless tradition of thematically moving through the seasons with elementary students, to continue to deliver a strong program including, if possible, all strands of the curriculum; reflective practice, depiction, composition and expression.

I’ve painted tempera valentines with elementary students before, with a focus on repeating pattern and the introduction and development of painting techniques.  Primarily, these have been expressive lessons, with a short discussion about line and repeating pattern.

This year, I decided to incorporate a reflective component by examining Scandinavian motifs, having seen such designs on plastic Ikea ornaments during last Christmas season.  A tradition of clean edged linoleum prints in crisp red and white, these motifs lend themselves well to an activity such as this one.

First, I showed the students a map of the Scandinavian countries and then a collection of motifs where they might draw their inspiration for a valentine.

For the purpose of depicting (studies or plans), I gave the students a piece of small 8 x 10 red construction paper and a piece of chalk.  They proceeded to observe the projected motifs and incorporate some of the patterns and designs discovered onto their own red hearts. At this point, I talked to the students about what it means to arrange pattern, line and shapes symmetrically over a line of symmetry.  I also demonstrated that an outline for a heart can be created by folding paper in half for perfect symmetry or drawing freehand for an approximation.

The students planned out their designs for the large compositions, to be completed on 18 x 24 construction paper, following a similar sequence of steps as was explored in the smaller format.  I chose purple as a background colour because of the approaching season of Lent, beginning next week, with the observation of Ash Wednesday, next week.  Other colours that might work successfully would be pink and black.

Again, with chalk, the students followed similar steps in larger format, in preparation for paint.  I had formally arranged the student desks so that they were all in partners.  I had 24 students, and prepared 12 buckets of paint, 6 white and 6 red.  I placed two brushes in each bucket.  The students traded off red and white, as they needed, making certain that whatever pattern, shape or line created on either side of the line of symmetry, needed to be reproduced on the other side of that line. 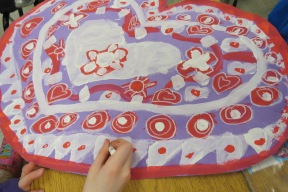