I cherished painting last night at the Rumble House.  Stories from Paris were my first stories of the day because, rising early, I had a coffee in my hand and some free time.  I clicked on the news.  Sigh.  Twelve human beings killed.

In the past, I’ve been appalled with satire that was posted on social media regarding MY GOD…MY JESUS…MY LORD.  There’s no way on earth I could understand the inhuman approach to such disturbing images that got a ‘big laugh’ from the throngs of the Faceless Facebook personae.  At the time, I was struggling.  At the time, my Mom was struggling…she was struggling for breath in hospital, having been afflicted with pneumonia.  No one loves/loved Jesus more than my Mom.  So…how did I feel about the public hatred for Christianity…the insensitive portrayal of MY Saviour?  I felt hurt…attacked…defiant.  But, how did my actions play out?  I expressed my point of view on the subject.  I shared my feelings.  I confronted and even celebrated my faith.  I understood that not everyone sees things my way and that doesn’t make me a lesser being and it certainly is no deficiency in the other.

Given who I am, I doubt that I would truly appreciate the perspective or satire shared by the Charles Hebdo weekly newspaper.  It’s just not in me to poke fun at any person’s faith or ideas.  However, what was accomplished by mowing down the lives of human beings who were simply expressing their opinions in a democratic society, can only be described as shocking and deeply disturbing.  I was left speechless as I thought all day about how much I treasure my freedom to express.

So…what did I paint?

I thought about a few different contexts and melded them.  I knew exactly what I wanted to paint.

For one reference, Grampa Moors used to spend hours watching Loonie Tunes, his favourite being The Road Runner and Wile E. Coyote.  Grampa, after a day in the woolen mill, would pull down his suspenders and turn on the cartoons, laughing in his way (I can hear it right now, as I type),  while a whole row of youngsters curled up under his arm on the sofa while he did.  I don’t think that there was anything more violent in my childhood than watching this miserable, but somehow hopeful, coyote, blown up again and again or clobbered at the base of a huge ravine by a giant boulder.  He always got up.  Something about the aesthetic and characters of this wee cartoon, reached into me yesterday…and I remember the cartoon with a great deal of affection.

Who might possibly paint a portrait of this violence…and make it seemingly banal and even humourous?  OH!  I KNOW!  Johannes Vermeer (1632-1675)  This would be somehow satirical…right?  How could I build upon this?  The artist paints an artist painting Wile E. Coyote…hmmm….what if the unsuspecting artist has as his possible undoing,  his own subject matter!  A bit of tension.  I KNOW!  Dynamite!  And so the connections developed…I sought out a reference where the subject is Johannes Vermeer, painting…here it is, Vermeer At Easel circa 1662-1668.

I hoped that I might adjust the composition…and modify, knowing full well that I wasn’t going to be able to pull a Vermeer out of my bum in 2 hours.

So, in the end…I positioned the figure on the panel so that I had that space in the upper third…I KNOW…I will include the word SATIRE, for those people who need it spelled out for them.  It DOES SEEM that a lot of people don’t understand OR appreciate good satire.

In the end, I am grateful for the generous bidding that took place on the piece.  I thank Rich and Jess for hosting on a relatively quiet night…grateful for Jennifer and Andy because I always enjoy a good conversation…for Mike who had some interesting things to tell me about Paris…for Gavin who drove me to the station…for Claire, former student, who showed up for her first paint night and for Robb who purchased this piece at auction, but best of all, the offer of rides/support/coffee and just general generosity. I’m richly blessed by this community. (although the set cost for an adult fare on the C-Train IS ridiculous)

Photo taken by Aaron Feser who is addicted to distraction. 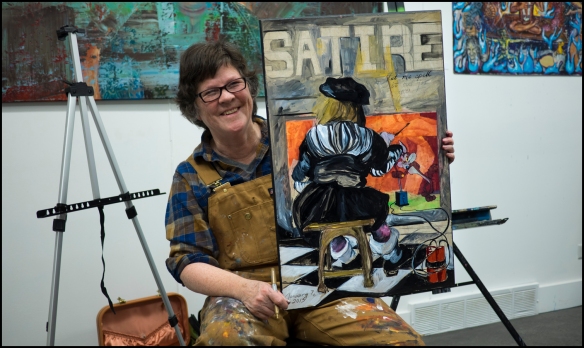 And this one by Robb or his buddy…not certain…but, I love it!

And..this piece of You Tube video…just because I love this song almost as much as Jack White does.