My great great grandfather,  John Moors, is somewhat elusive on my ancestral search.  I am having a difficult time finding his parents.  Through a number of links, I have his birthplace as Yeovil, Somerset, England.  It may be  that he is the son of a Jane Moors, resident of the Swan Inn at the time.  Jane disappears soon afterward, so I am also going to make the assumption that John ended up lost in the struggles of the community at the time, likely orphaned…dunno.  I put this research ‘out there’ in the hopes that other researchers might confirm or add to my information.  I also hope that my research makes the search for others less taxing. 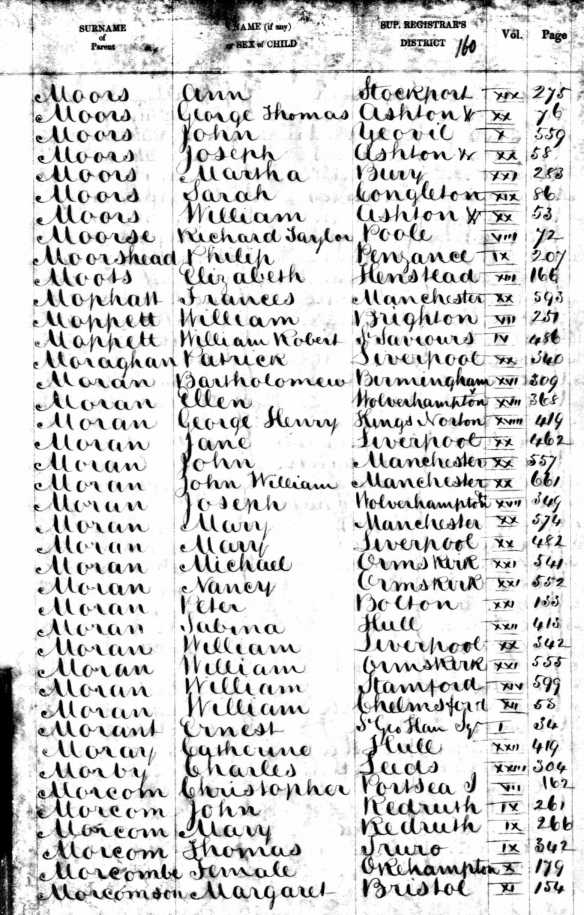 He married a Grace Rebecca Porter and together, they had four girls and one son, also named John.  It was this lad who ended up on a ship at the age of 13, a home child to Canada, working on a piece of land in the Arthur area until 1898, when his father, mother and family also immigrated to Canada.

This watch was presented to my Great Great before he immigrated to Canada in 1898.  It, in turn, was passed on to my Great Grandfather who passed it to my Grandfather.  Unfortunately, it fell under disrepair before it found its way into my father’s hands.  Still, the historical inscription remains. 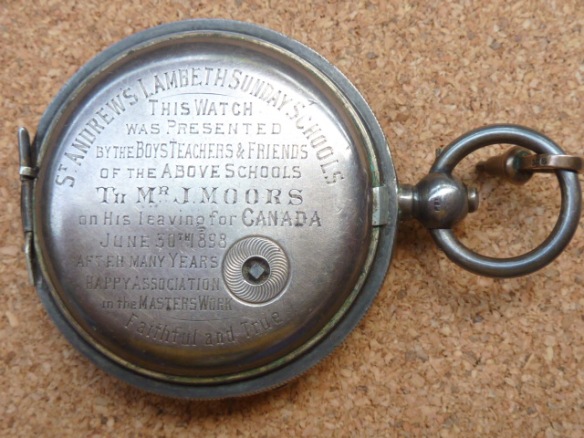 “My Grandfather Moors was a red-headed man with the most beautiful blue eyes that you ever did look at!  He was a very quiet man.  And Grandma Moors was a very short lady, especially when compared with my father who was 6’2″.  When we went down to visit Grandma and Grandpa, just as a joke, Father would pick Grandma up by the elbows, right up off the floor, and give her a great big kiss.  He’d put her down and we’d all laugh.  Of course, Grandma rather enjoyed it too, I’m sure!

Grandfather Moors took me to the Toronto Exhibition to see another new-fangled idea, the milking machine.  He promised me that we would go to the midway.  Of course we didn’t make it because all he did was look at the cattle, hogs and horses.  The result of that trip was the purchase of a cream separator.  He told us that if he caught any of us playing with this machine, what he would do to us would fill a book.  But I noticed that after the beauty and novelty wore off, we soon got our turn to run it.  There wasn’t much fun in it after all!”

Interesting that on Rose Margaret’s marriage to Harry Clayton, on the marriage certificate, John is listed as being a Stencil Maker.  See on the far left side of the document. 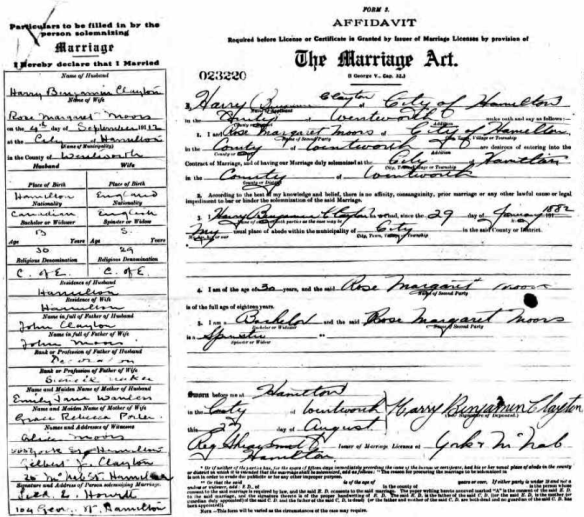 John Moors was laid to rest in 1914 in an unmarked grave in the Hamilton Cemetery, sharing the space with my great Uncle Robert A. Moors.  His only son (Canadian home child), John Moors, is at rest in Etaples, France, having died as the result of a German bombing raid on Canadian Hospitals in Etaples on May 19, 1918.

John’s signature on his marriage certificate… 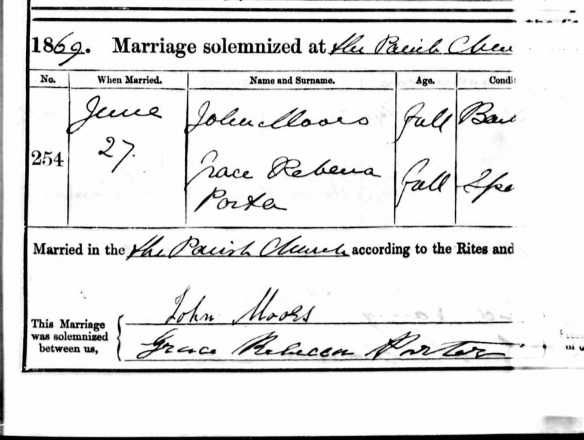 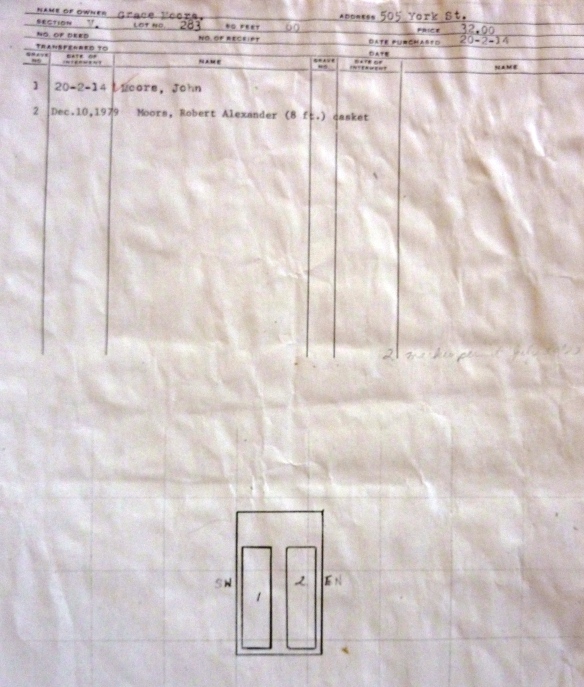 The spot where Robert rests is well marked.  His wife, Jessie Maclean, has also slipped beneath my genealogy radar. 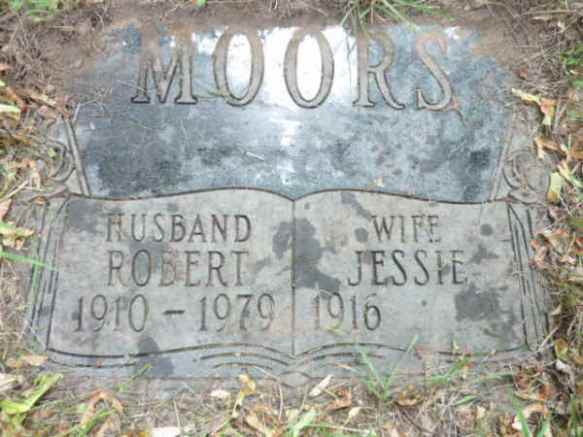 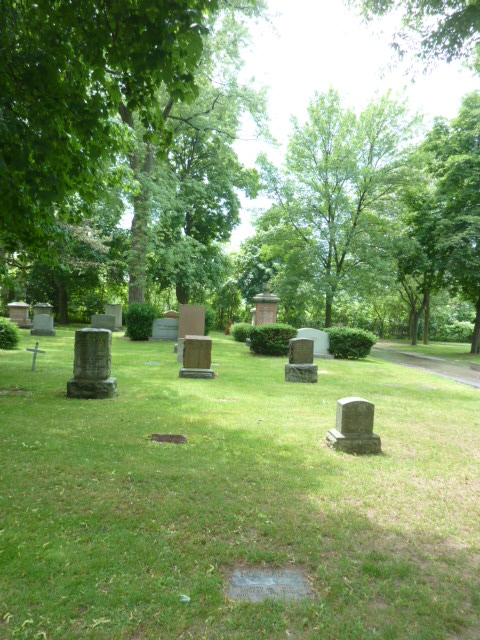 Resting Place for Robert A. Moors and to the left of this flat marker, foreground would be John Moors, Robert’s grandfather.  Hamilton Cemetery York Blvd