Are my readers thinking that I’ve only been picking up litter the last while?  Might it be the quality and content of my posts that are giving them this impression? Suffice it to say that many other things have been keeping me busy as well.  It has been a varied, and in many ways challenging, Lenten journey, thus far.  But, in so many ways, I’ve grown in understanding, interests and spirituality.

Given my typical ‘heady’ choice of reading, I have spent the past few weeks reading novels that move rather quickly.  I even took up my friend’s challenge to read a mystery book, a genre that I avoid for some reason.  At her prompting, I picked up The Lighthouse by P.D. James.  While I can’t say that I would read another James mystery,  it 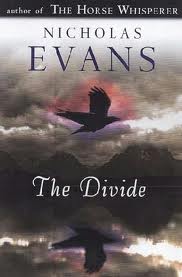 served its purpose by taking me to another place and causing me to escape for a while.  I liked the Combe island setting very much and found myself, at times, wishing to visit such a dramatic and inspiring coastline.  I remember that while spending a week in North Rustico on Prince Edward Island this past summer, I sometimes experienced a sense of mystery because of the sound of raindrops on the roof of the cottage at night…the isolation from other properties.  When I looked out into the dark of night, it was a complete darkness…such a huge contrast to living in the city.  Staying on an island, surrounded by the power of the Atlantic Ocean, gave a sense of vulnerability.  The book, The Lighthouse stirred up that remembrance.

The next book I read was The Divide by Nicholas Evans, author of The Horse Whisperer.  From the outset, the book was captivating, given the discovery of the body curled up in ice.  For me, the novel didn’t sustain itself, although I did take an interest in the different expressions of activism, portrayed.  Again, I responded to the rich description of the landscape and what the divide had come to mean to the various characters in the narrative.  This, again, was a setting that I would love to experience for myself, in fact, I feel as though I HAVE been in such places.  The relational content, the broken marriage, was not as interesting for me.

And finally, in the past three weeks, I’ve read The Birth House by Ami McKay.  Dora Rare is a beautifully written character.  I was once again, taken by the setting, Nova Scotia during wartime.  I enjoy the type of novel that shows us strength and resilience in characters.  Ami McKay achieved that very well.  Dora is resourceful and strong and works against the attitudes of her wee village.  Throughout the novel, she is in search of a particular sense of freedom and needs to challenge the ideas of her family and the culture of her community.

I have made this letter longer, because I have not had the time to make it shorter. Blaise Pascal