I have admired the work of Chris Flodberg for years.  From the time I used up my father’s leftover pots of oil colour (He was a real fan in the late 50s/early 60s of paint-by-numbers.), I’ve enjoyed the smell of linseed oil.  The memory of the years and years of painting with oils when most artists were using acrylics, makes me smile.  Such a yummy medium!  It is also a rich experience to work with the paint over a longer period of time than what polymers will allow.  It is his sensitive use of this medium, that causes me to really, really enjoy Chris Flodberg’s work.

On the day when I believed it to be unfortunate to be a day early for On Common Ground: Conversations About Our City featuring A Matter of Trust, hosted by the Public Library, I ended up being very-much blessed by the Encounters exhibit at the Glenbow Museum.  Second to that, I was exiting the second floor by the stairs,  just as the artist, Chris Flodberg, and a friend were heading up those same stairs.  Initially, we shared observations about the way that his painting, Love and War in the World of Men (2004) was mounted in the stairwell.

It was a surprising and pleasant conversation because Chris then examined the context of the painting, its symbolism and explained how he staged his environment for the work.  It was such an awesome and serendipitous event!  I  recently wrote Chris, asking his permission to post the image of this interior here, so that I might more explicitly share some of those elements, so stay posted.

Uh huh!  Chris has given me his kind permission to post an image of his painting, Love and War in the World of Men (2004) here.  A grander description to follow…but now, on to the off-leash!  Thanks, Chris. 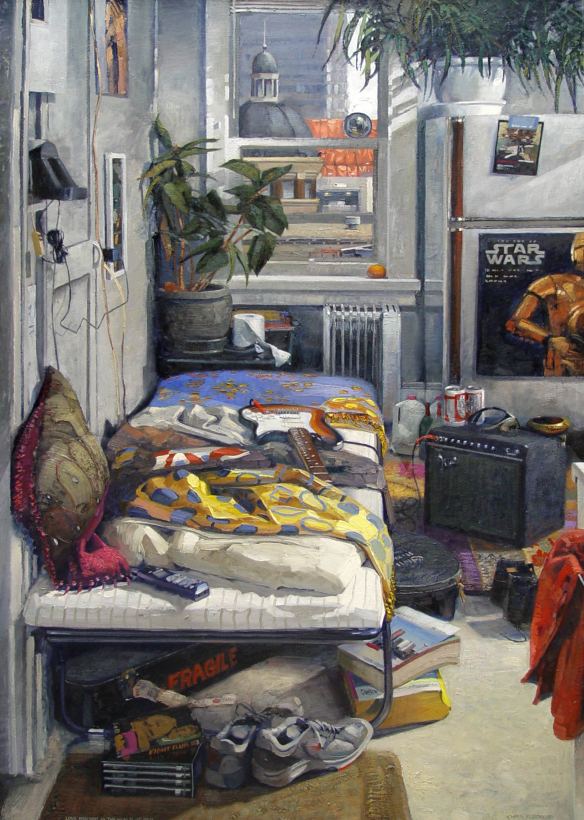 Chris pointed out some of the connections between Jan van Eyck’s Arnolfini Portrait and his own painting, Love and War in the World of Men.   If you look at the details; the orange perched on the window sill and the pair of shoes in the lower third of both compositions.  These elements create whimsy, along with an interesting continuity of what it means to be ‘a guy’ in a very intimate space.  I challenge my readers to find other such similarities in the content. 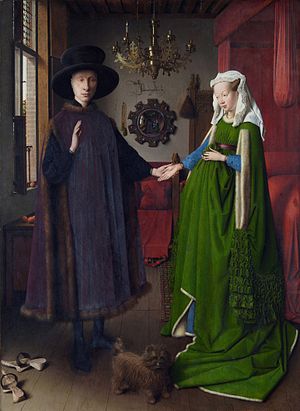 The best way to become acquainted with a subject is to write a book about it. Benjamin Disraeli